Tuta absoluta is a devastating pest of Tomato. It is originated from South America. Recently Tuta absoluta considered to be a serious threat to tomato production in Mediterranean region. The newly introduced pest from south America finding the shores of the Mediterranean a perfect new home where it can breed between 10-12 generations a year. Each female can lay 250-300 eggs in her life time. Â This pest is crossing boarders and devastating tomato production both protected and open fields. The infestation of Tuta absoluta also reported on potato, Aubergine and common beans.

Tuta absoluta is a very challenging pest to control. Effectiveness of chemical control is limited due to insect's nature of damage as well as its rapid capability of development of insecticide resistant strains. The use of biological factors are still largely under development and not ready to combat this pest effectively and in a cost effective way. Â Sex pheromone trap is using as an early detection tool. Mass trapping and lure and Kill application of pheromone has been found to be effective to control Tuta absoluta. IPM strategies are being developedÂ to control Tuta absoluta. Various active substances can be applied in combination with bio-rational control tactics.

Since the first detection in Spain in 2006, this pest is spreading rapidly across Southern Europe and North Africa to engulf the whole of the Mediterranean countries. Until today the presence of Tuta absoluta has been reported in Italy, France, Malta, United Kingdom, Greece, Switzerland, Portugal, Morocco, Algeria, Tunisia, Libya and Albania during last two years. Tuta absoluta is already a serious pest in South America since the 80’s.

The larvae of Tuta absoluta mine the leaves producing large galleries and burrow into the fruit, causing a substantial loss of tomato production in protected and open filed cultivations. The larvae feed on mesophyll tissues and make irregular mine on leaf surface. Damage can reach up to 100%. This pest damage occurs throughout the entire growing cycle of tomatoes. Tuta absoluta has a vey high reproduction capability. There are up to 10-12 generations in year in favourable conditions. The larvae are very unlikely to enter diapause as long as food source is available. Tuta absoluta can overwinter as eggs, pupae and adults. Adult female could lay hundreds of eggs during her life time. Tomato plants can be attacked from seedlings to mature plants. In tomato infestation found on apical buds, leaves, and stems, flowers and fruits, on which the black frass is visible. On potato, mainly aerial parts are attacked. However damage on tuber also recently reported.

Tuta absoluta reduced yield and fruit quality of Tomato grown in green house and open field. Severely attacked tomato fruits lose their commercial value. 50–100% losses have been reported on tomato (EPPO, 2005). On potato, CIP (1996) considers that is one of the major pests of foliage, occurring in warm zones of low altitudes (below 1000 m)

As larvae are internal feeders it is difficult to achieve an effective control through application of chemical insecticides. Moreover, Tuta absoluta can rapidly evolve strains with reduced susceptibility to insecticides that have been previously effective. Failure by synthetic insecticides has also been reported in many countries. 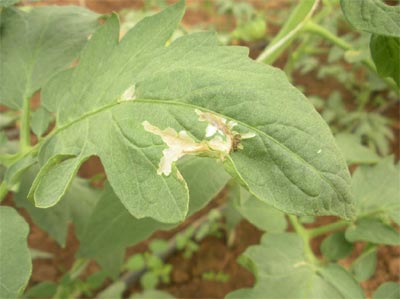 Tuta absoluta is a micro lepidopteron moth with high reproductive potential. There are about 10–12 generations per year. The total live cycle is completed with in 30-35 days. Adults are nocturnal and hide between leaves during the day time. Adults are 5-7 mm long and with a wingspan of 8-10 mm Adult females lay eggs on host plants and. mature female could lay up to 260 eggs before completing life cycle. Eggs are Small cylindrical, creamy white to yellow 0.35 mm long. Egg hatching takes place 4-6 days after egg lying. The Larvae is cream in colour with characteristic dark head. Four larval instars develop. Larvae do not enter diapause when food is available. Pupation may take place in the soil, on the leaf surface or within mines. Tuta absoluta can overwinter as eggs, pupae or adults depending on environmental conditions. The most important identifying characters is the Filiform antennae (bead like antennae), silverfish-grey scales and characteristic black spots present in anterior wing. The larvae becoming greenish to light pink in second to fourth instars. Larval period is most damaging period which completed with in 12-15 days.

Monitoring
Russell IPM manufactures and supplies pheromone lure, trap and complete monitoring systems for Tuta absoluta. Pheromone trap based on Qlure-TUA gives early warning of infestation and also exhibits the density of the insect accurately in low population to medium level infestation. In heavy infestation, Qlure -TUA tends to give high level of capture which makes data collection difficult. For this application Qlure-TUALD is specifically designed to give lower capture rate to make data collection in heavily infested field manageable.

Mass Trapping
Qlure -TUA with its high capture rate is ideal for mass trapping of Tuta absoluta particularly in for protected tomato cultivation. It helps to reduce population in greenhouses particularly if insect exclusion nets and tight doors were used. Mass trapping is a technique that involves placing a higher number of traps in the crop field in various strategic positions to remove a sufficiently high proportion of male insects from the pest population. It is widely used in conjunction with other control measures to achieve acceptable level of damage and to reduce the reliance on insecticide treatments. Mass trapping is a potential option for open field production. However, and for practical reasons, application in protected agriculture has a higher chance of success.

Lure and Kill:
Lure and Kill is a very promising approach to control the male adults of Tuta absoluta with minimum amount of insecticide application. This will reduce the mating incidence and therefore reducing the number of viable eggs. Based on sustained release matrix, Lure and kill product can release the pheromone over a long period normally over 6-8 weeks while sustaining the activity of the contact insecticide

throughout the same period. Lure and Kill technique normally is a single application provides safe yet constant control over a long period of time. Pheromones of other pests many be incorporated to reduce the need to other insecticide applications. It's targeted application in specific locations leaves over 99% of the plant source insecticide free providing a safe environment for beneficial insect to develop and to participate in the over all control of Strategy. Several trials are taking place to evaluate this technology and its viability to different Tomato production methods. Lure and kill should always be considered as a part of an Integrated Pest Management program.

The following bio-gents could be used to control Tuta absoluta:

The egg parasitoid Trichogramma achaeae has been identified as a candidate for biological control of the South American Tomato Pinworm, Tuta absoluta. On greenhouse conditions a high efficacy, 91.74 % of damage reduction was obtained when releasing 30 adults/ plant (= 75 adults/ m2) every 3-4 days on August and September of 2008 in the southeast of Spain (Cabello et al., 2009).

The use of biological pest control, the damsel bug Nabis pseudoferus, is being studied to be applied in Spanish greenhouses. Two semi field bioassays on tomato plants, under controlled conditions, have shown an important reduction in the number of eggs of Tuta absoluta, between 92 and 96 %, when releasing 8 or 12 first stage nymphs of Nabis pseudoferus per plant (Cabello et al., 2009).

Microbial control
Bacillus thuringiensis var. kurstaki have exhibited satisfactory efficacy against Tuta absolutalarval infestations in Spanish outbreaks. Delayed application of Bacillus thuringiensis may cause higher insect mortality if the insects become more susceptible to the pathogen after a longer period of feeding on the resistant crop. It is reported that in a combine application of mass release of Trichogramma pertiosum and Bacillus thuringiensis resulted fruit damage only 2 % in South America.
Entomopathogenic fungus Metarhizium anisopliae could be caused female’s mortality up to 37.14%. Laboratory studies indicated Beauveria bassiana could cause 68% larval mortality.

Good Agricultural Practices
Good Agricultural Practices includes cultural practices, rotation with non-solanaceous crops, ploughing, adequate fertilization, irrigation, destruction of infested plants and post have vest plant debris. At any time of the growing cycle is detected or fruit stalks damaged by larvae of Tuta, there will be an overhaul of the whole plot, the process of withdrawal and destroyed securely to prevent the pest completes its cycle and continue to spread. There are a number of cultural control measures that aid the eradication of this pest. Crop rotation, crop removal and the selective removal and destruction of infested plant material are important cultural control practices that would help eradication of this pest in green houses. The wild host plants should also be removed to prevent the further build up of a potential population.

IPM strategies are being developed in South America to control Tuta absoluta. Various active substances can be applied n combination with bio-rational control tactics. The integrated control method recommended employs, in order, (1) massive trapping before planting, (2) clearing the soil of crop residues, (3) the application of imidacloprid in the irrigation water 8-10 days after planting, (4) the application of either spinosad or Indoxacarb if occasional individuals of Tuta absoluta are observed,